I recently finished a project where I was tasked to investigate why a site (that receives over one million organic visits per month) does not rank for any featured snippets.

This is obviously an alarming situation, since ~15% of all result pages, according to the MozCast, have a featured snippet as a SERP feature. The project was passed on to me by an industry friend. I’ve done a lot of research on featured snippets in the past. I rarely do once-off projects, but this one really caught my attention. I was determined to figure out what issue was impacting the site.

In this post, I detail my methodology for the project that I delivered, along with key takeaways for my client and others who might be faced with a similar situation. But before I dive deep into my analysis: this post does NOT have a fairy-tale ending. I wasn’t able to unclog a drain that resulted in thousands of new visitors.

I did, however, deliver massive amounts of closure for my client, allowing them to move on and invest resources into areas which will have a long-lasting impact.

Now, when my client first came to me, they had their own suspicions about what was happening. They had been advised by other consultants on what to do.

They had been told that the featured snippet issue was stemming from either:

1. An issue relating to conflicting structured data on the site

2. An issue relating to messy HTML which was preventing the site from appearing within featured snippet results

I immediately shut down the first issue as a cause for featured snippets not appearing. I’ve written about this topic extensively in the past. Structured data (in the context of schema.org) does NOT influence featured snippets. You can read more about this in my post on Search Engine Land.

As for the second point, this is more close to reality, yet also so far from it. Yes, HTML structure does help considerably when trying to rank for featured snippets. But to the point where a site that ranks for almost a million keywords but doesn’t rank for any featured snippets at all? Very unlikely. There’s more to this story, but let’s confirm our suspicions first.

Let’s start from the top. Here’s what the estimated organic traffic looks like:

Note: I’m unable to show the actual traffic for this site due to confidentiality. But the monthly estimation that Ahrefs gives of 1.6M isn’t far off.

Out of the 1.6M monthly organic visits, Ahrefs picks up on 873K organic keywords. When filtering these keywords by SERP features with a featured snippet and ordering by position, you get the following: 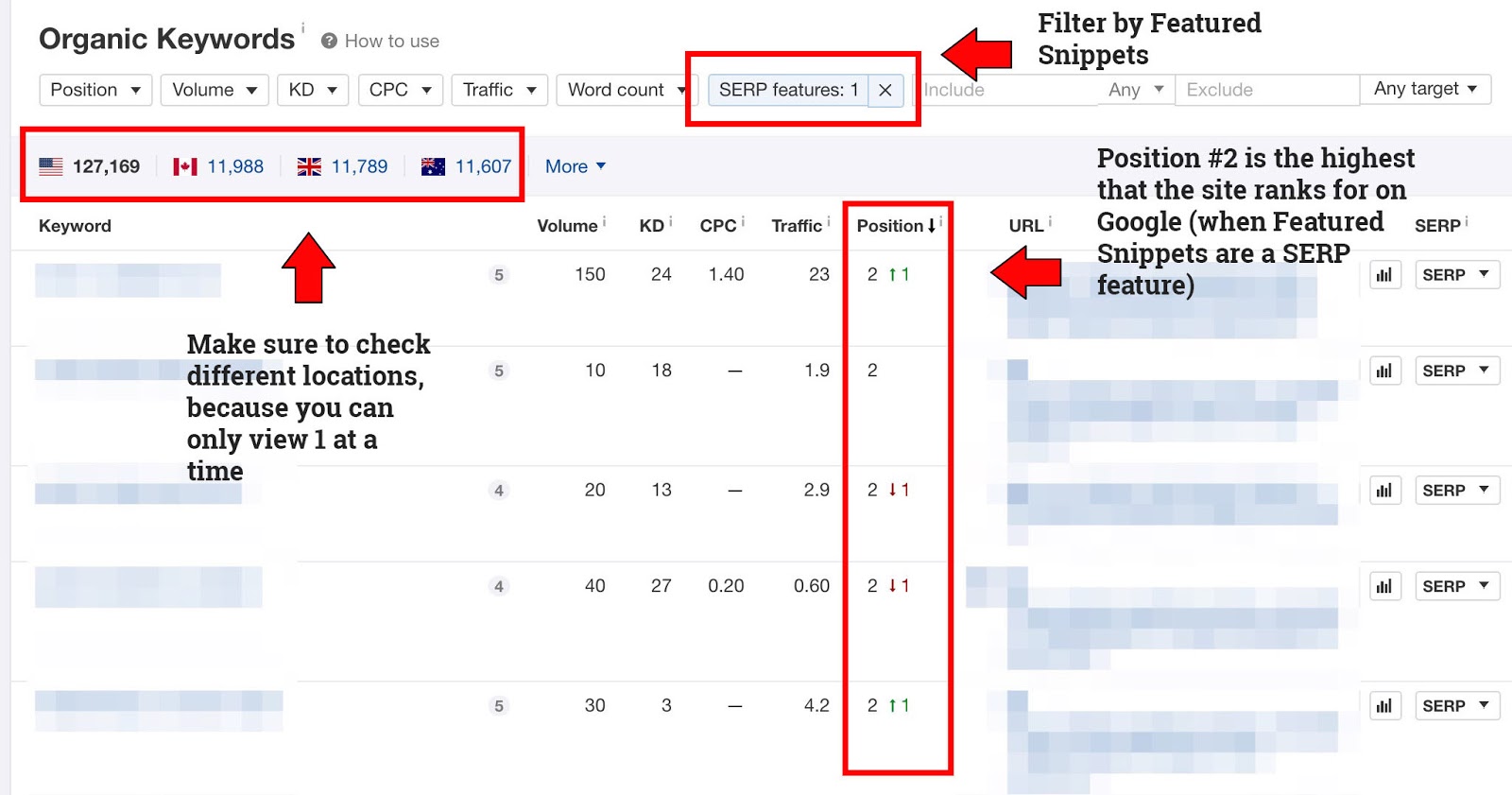 I then did similar research with both Moz Pro using their featured snippet filtering capabilities as well as SEMrush, allowing me to see historical ranking.

All 3 tools displaying the same result: the site did not rank for any featured snippets at all, despite ~20% of my client’s organic keywords including a featured snippet as a SERP feature (higher than the average from MozCast). 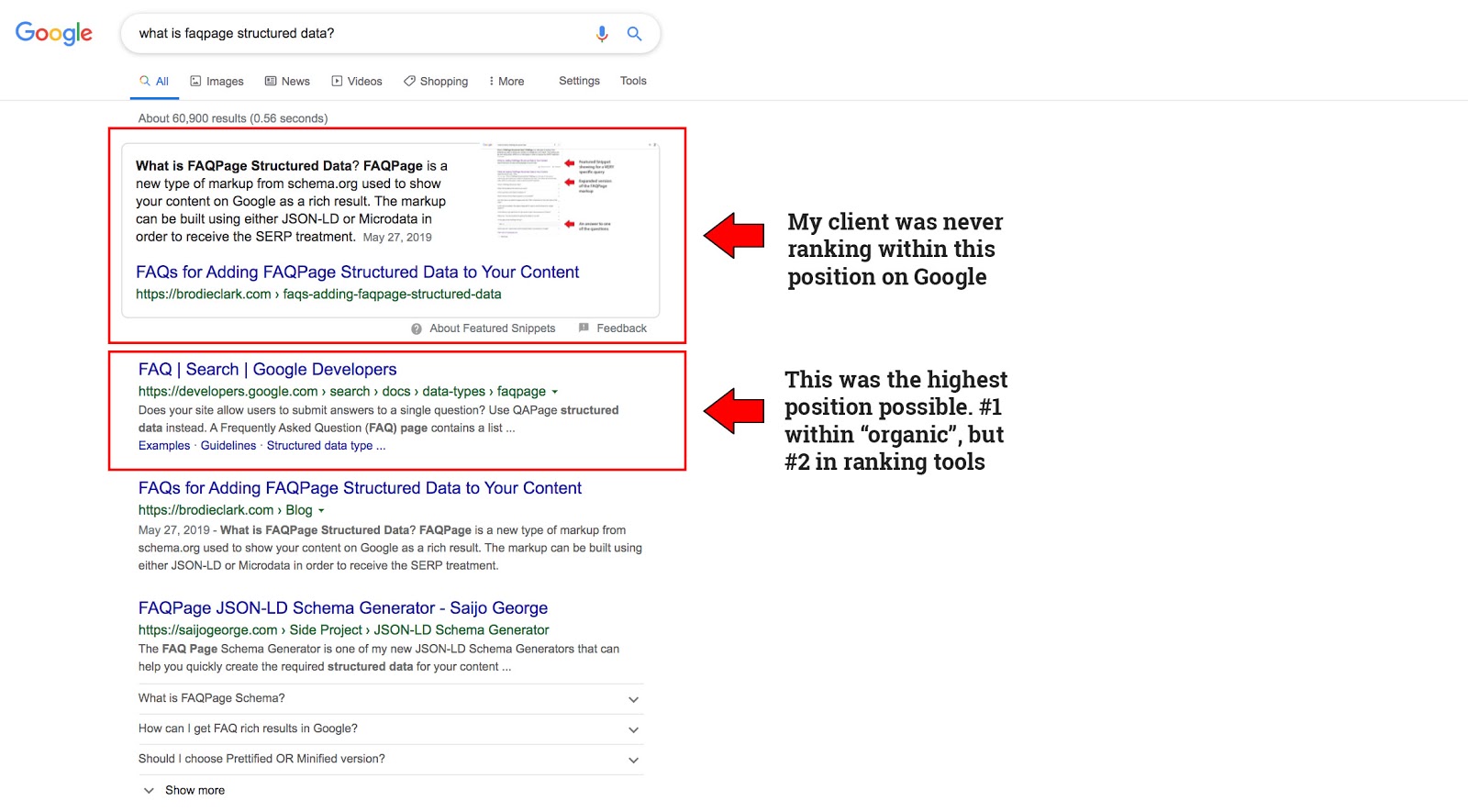 It was clear that the site did not rank for any featured snippets on Google. But who was taking this position away from my client?

The next step was to investigate whether other sites are ranking within the same niche. If they were, then this would be a clear sign of a problem.

An “us” vs “them” comparison

Again, we need to reflect back to our tools. We need our tools to figure out the top sites based on similarity of keywords. Here’s an example of this in action within Moz Pro:

Once we have our final list of similar sites, we need to complete the same analysis that was completed in the previous section of this post to see if they rank for any featured snippets.

With this analysis, we can figure out whether they have featured snippets displaying or not, along with the % of their organic keywords with a featured snippet as a SERP feature.

The next step is to add all of this data to a Google Sheet and see how everything matches up to my client’s site. Here’s what this data looks like for my client: 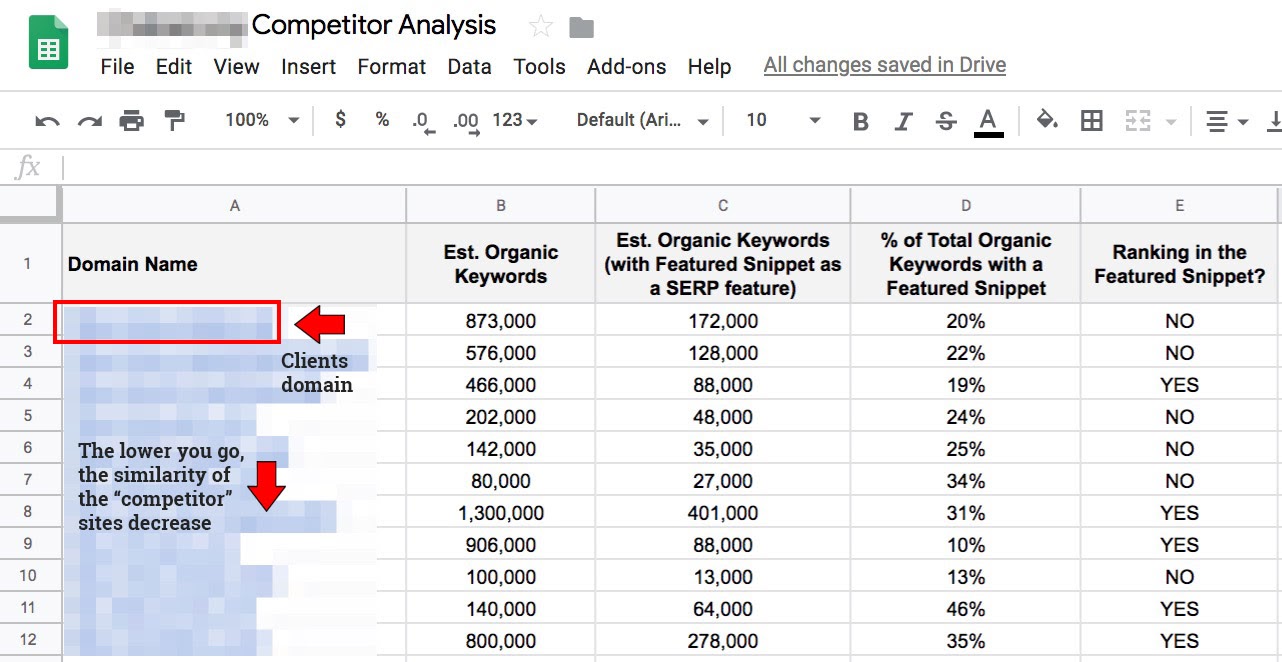 I now need to dig deeper into the sites in my table. Are they really all that relevant, or are my tools just picking up on a subset of queries that are similar?

I found that from row 8 downwards in my table, those sites weren’t all that similar. I excluded them from my final dataset to keep things as relevant as possible.

Based on this data, I could see 5 other sites that were similar to my clients. Out of those five sites, only one had results where they were ranking within a featured snippet.

80% of similar sites to my client’s site had the exact same issue. This is extremely important information to keep in mind going forward.

Although the sample size is considerably lower, one of those sites has ~34% of search results that they rank for where they are unable to be featured. Comparatively, this is quite problematic for this site (considering the 20% calculation from my client’s situation).

This analysis has been useful in figuring out whether the issue was specific to my client or the entire niche. But do we have guidelines from Google to back this up?

Within Google’s Featured Snippet Documentation, they provide details on policies surrounding the SERP feature. This is public information. But I think a very high percentage of SEOs aren’t aware (based on multiple discussions I’ve had) of how impactful some of these details can be.

For instance, the guidelines state that:

“Because of this prominent treatment, featured snippet text, images, and the pages they come from should not violate these policies.”

They then mention 5 categories:

Number five in particular is an interesting one. This section is not as clear as the other four and requires some interpretation. Google explains this category in the following way:

And the even more interesting part in all of this: these policies do not apply to web search listings nor cause those to be removed.

It can be lights out for featured snippets if you fall into one of these categories, yet you can still be able to rank highly within the 10-blue-link results. A bit of an odd situation.

Based on my knowledge of the client, I couldn’t say for sure whether any of the five categories were to blame for their problem. It was sure looking like it was algorithmic intervention (and I had my suspicions about which category was the potential cause).

But there was no way of confirming this. The site didn’t have a manual action within Google Search Console. That is literally the only way Google could communicate something like this to site owners.

I needed someone on the inside at Google to help.

One of the most underused resources in an SEOs toolkit (based on my opinion), are the Google Webmaster Hangouts held by John Mueller.

You can see the schedule for these Hangouts on YouTube here and join live, asking John a question in person if you want. You could always try John on Twitter too, but there’s nothing like video.

You’re given the opportunity to explain your question in detail. John can easily ask for clarification, and you can have a quick back-and-forth that gets to the bottom of your problem.

This is what I did in order to figure out this situation. I spoke with John live on the Hangout for ~5 minutes; you can watch my segment here if you’re interested. The result was that John gave me his email address and I was able to send through the site for him to check with the ranking team at Google.

I followed up with John on Twitter to see if he was able to get any information from the team on my clients situation. You can follow the link above to see the full piece of communication, but John’s feedback was that there wasn’t a manual penalty being put in place for my client’s site. He said that it was purely algorithmic. This meant that the algorithm was deciding that the site was not allowed to rank within featured snippets.

And an important component of John’s response: 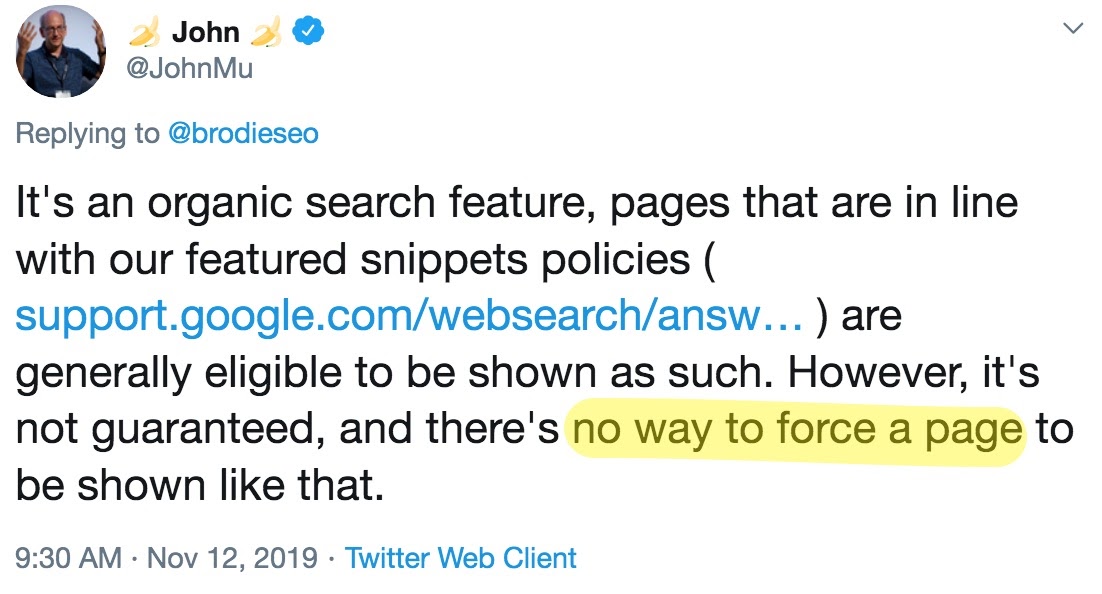 If a site doesn’t rank for any featured snippets when they’re already ranking highly within organic results on Google (say, within positions 1–5), there is no way to force it to rank.

For me, this is a dirty little secret in a way (hence the title of this article). Google’s algorithms may decide that a site can’t show in a featured snippet (but could rank #2 consistently), and there’s nothing a site owner can do.

…and the end result?

The result of this, in the specific niche that my client is in, is that lots of smaller, seemingly less relevant sites (as a whole) are the ones that are ranking in featured snippets. Do these sites provide the best answer? Well, the organic 10-blue-links ranking algorithm doesn’t think so, but the featured snippet algorithm does.

This means that the site has a lot of queries which have a low CTR, resulting in considerably less traffic coming through to the site. Sure, featured snippets sometimes don’t drive much traffic. But they certainly get a lot more attention than the organic listings below: 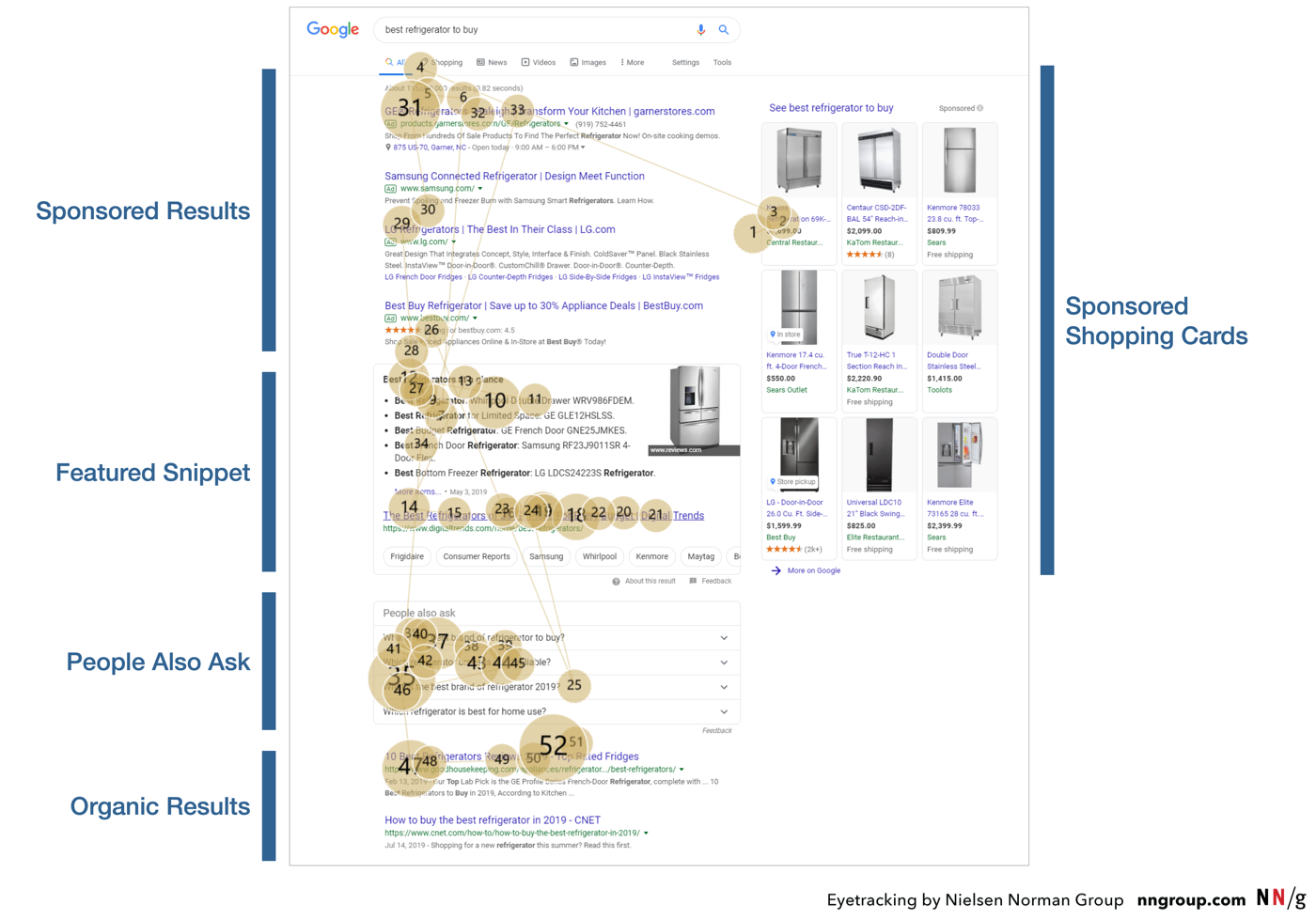 Based on the Nielsen Norman Group study, when SERP features (like featured snippets) were present on a SERP, they found that they received looks in 74% of cases (with a 95% confidence interval of 66–81%). This data clearly points to the fact that featured snippets are important for sites to rank within where possible, resulting in far greater visibility.

Because Google’s algorithm is making this decision, it’s likely a liability thing; Google (the people involved with the search engine) don’t want to be the ones to have to make that call. It’s a tricky one. I understand why Google needs to put these systems in place for their search engine (scale is important), but communication could be drastically improved for these types of algorithmic interventions. Even if it isn’t a manual intervention, there ought to be some sort of notification within Google Search Console. Otherwise, site owners will just invest in R&D trying to get their site to rank within featured snippets (which is only natural).

And again, just because there are categories available in the featured snippet policy documentation, that doesn’t mean that the curiosity of site owners is always going to go away. There will always be the “what if?”

Deep down, I’m not so sure Google will ever make this addition to Google Search Console. It would mean too much communication on the matter, and could lead to unnecessary disputes with site owners who feel they’ve been wronged. Something needs to change, though. There needs to be less ambiguity for the average site owner who doesn’t know they can access awesome people from the Google Search team directly. But for the moment, it will remain Google’s dirty little featured snippet secret.