A version of this article was previously published on LinkedIn.

For most, enjoying and using social media is a relatively hassle-free experience. Many of us log onto our favorite platforms multiple times a day, and it’s sometimes the first thing we check in the morning and the last that we see at night.

But all of our experiences aren’t the same. For a large portion of the world’s population, one or more of their five senses is impaired, which greatly impacts the experience they have online.

According to the World Health Organization, an estimated 1.3 billion people have some form of vision impairment, with roughly 253 million experiencing severe vision impairment or total blindness. That’s a large portion of the global population that has to use text-to-speech programs or screen readers to navigate the digital world.

There are also roughly 466 million people in the world who are deaf or hearing impaired. If the effort isn’t being made to be accessibility-friendly online, then the experiences of these individuals are being hindered.

Fortunately, there are features built directly into social platforms and simple best practices that ensure that your social media—whether it’s for a brand, an organization, or yourself—is accessible to all.

Since their creation in 1999, emojis have become a huge part of the digital landscape, especially on social media. They’re seen in mainstream marketing, available in email services like Gmail and Microsoft Outlook and built into compose windows across social platforms.

A recent study conducted by the social media analytics company Quintly revealed that nearly half of the posts on Instagram during the first half of 2019 used emojis in the captions. Their findings also discovered that more emojis usually resulted in higher engagement. However, if you want your social content to be popular and inclusive, consider this: When someone uses a screen reader or text-to-speech program to read an emoji, they hear the assigned description for that character.

This means that if you’re someone who is partial to typing consecutive emojis, changing the color on customizable icons, or using emojis in the middle of posts or Tweets, you’re slowing down the experience for the visually impaired.

Using 🌴😎🍹💃🏼🎉 for the caption on your Insta-worthy vacation pictures is fun and adorable. However, all anyone using a screen reader hears is “Palm Tree, Smiling Face With Sunglasses, Tropical Drink, Woman Dancing: Medium-Light Skin Tone, Party Popper,” and that’s unintelligible.

To keep your emoji usage accessible, be sure to:

Use emojis in moderation. If you are going to use emojis, limit yourself to two or three so you don’t bring down the readability of your content.
Place emojis at the end of social posts. The more important information should be consumed by the user first. Interjecting emojis in the middle of sentences or paragraphs could mix up the messaging once it’s read aloud by a screen reader.
Avoid using emojis in your social profile name.
Resist changing the color on customizable emojis. Every unique icon gets descriptor information. That includes skin tones. If you can’t stand the Simpsons look, try to make your customized emoji the only one in your post.

If you’re not sure what kind of description a particular emoji icon has been assigned, check out emojipedia.org. The site has every emoji’s description, including ones with custom colors, for multiple platforms and devices. It’s also the best way to stay updated on when new emojis are being released, like the long-awaited accessibility icons.

2. We love a good hashtag moment

Hashtags are everywhere on social, and making them inclusive takes even less effort than accessible emoji usage. It all comes down to your keyboarding skills.

Besides the # symbol, which is read as “number,” text-to-speech programs read hashtags just like they do any other word, using spaces and capital letters to differentiate between separate terms. If you were to publish a post with the hashtag #socialmediarocks, the accessibility program would blend those three words into one amalgamated mess. By simply capitalizing each word, also known as camel case, #SocialMediaRocks becomes three words instead of one for the program reading it. It’s also easier for everyone, even without vision impairment, to read as well.

BlackLivesMatter is announced as you might expect: “black lives matter”#SocialMedia #Accessibility

3. Paint a vivid picture with your words

The expression, “a picture is worth a thousand words,” is only true if you’re taking the necessary steps to ensure that a screen reader can also interpret that photo. Facebook, Twitter, Instagram and LinkedIn all offer ways to add alternative text (alt text) to image posts so they’re able to be described by a screen reader.

Facebook automatically assigns alt text to uploaded pictures, although the descriptions are normally vague or sometimes not even very accurate. However, it’s easy to replace the assigned alt text with your own.

Similarly, in the Instagram app, users can use the “Write Alt Text” function at the bottom of the final screen before you “Share,” under “Advanced Settings.”

LinkedIn and Twitter’s alt text features are easy to find. When posting an image to LinkedIn simply click “Add Alt Text” in the top right corner or the picture, and on Twitter click “Add Description” near the bottom left of the compose window. 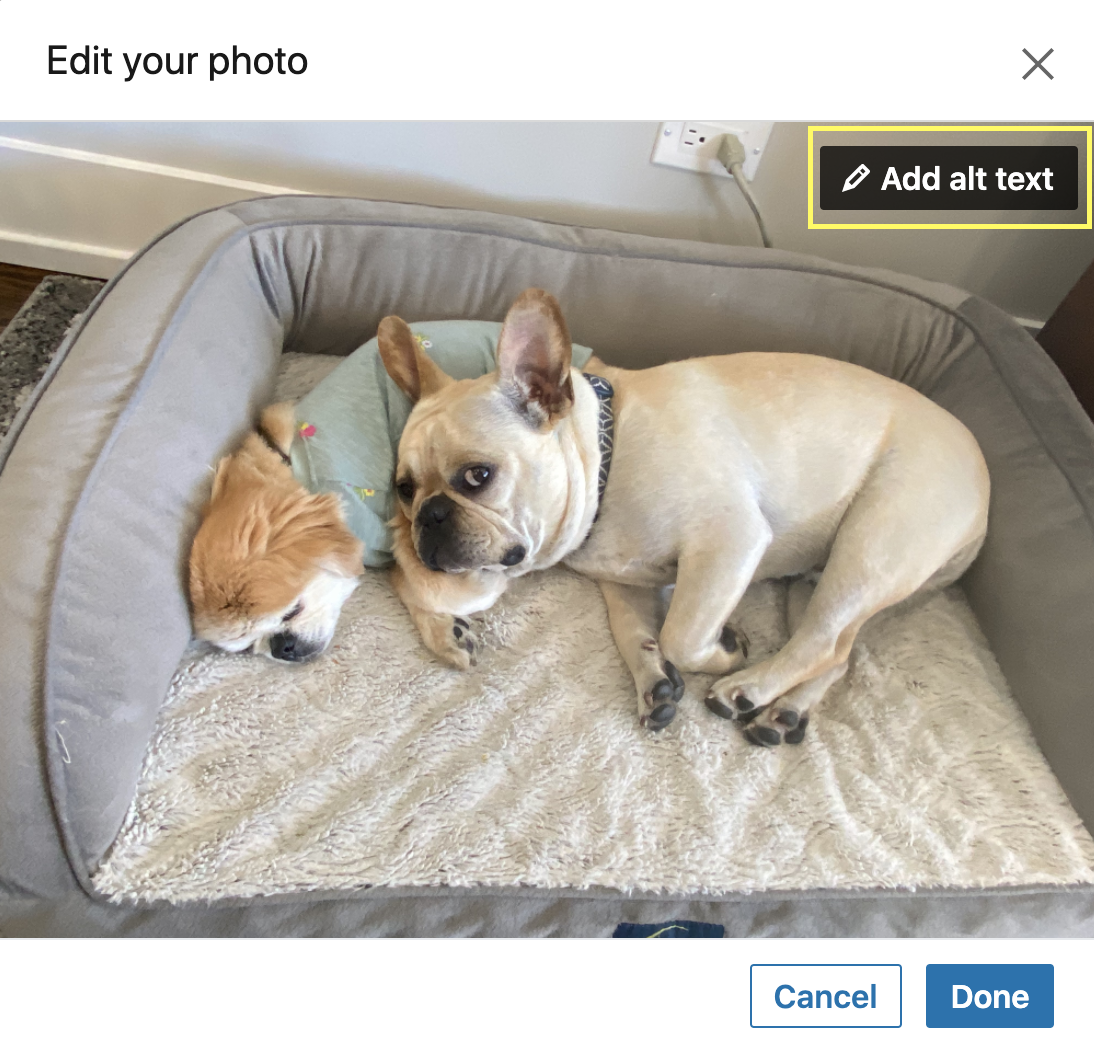 Accessibility is also a good argument for linking to webpages or digital forms instead of posting flyers or text-heavy graphics on your social media. Adding alt text to those would be incredibly complicated and overwhelming as it comes through a screen-reader.

Next time you have an event that you want your followers to attend, create a Facebook event or an Eventbrite listing that you can link to instead. Not only is this method more accessible, but it also makes it easier for users to RSVP when they have something clickable. Plus, you get the added bonus of Facebook and Eventbrite sending reminders to registered guests.

4. Closed captioning brought to you in part by…

Have you noticed how GIFs of video clips that include dialogue have closed captioning on them about 99% of the time? You should be doing that with any of your videos that have dialogue in them, regardless if it’s a GIF, a MOV file, or an MP4, so that users who are deaf or hearing impaired can enjoy your content like everyone else.

Both YouTube and Vimeo, two of the biggest video-sharing platforms on the Internet, offer ways to add captioning and/or subtitles to any videos you upload. For social media professionals on the go, there are also captioning apps like Clipomatic or Zubtitles, which automate your subtitles on social videos.

There’s a newer trend in social media where people use custom fonts in their bios, posts, and Tweets to add aesthetic interest to the text. These could be script, block, bolded or italic fonts like the one shown below where the Vancouver Canucks used a custom font to type WE HAVE A TRADE TO ANNOUNCE. This makes the post unreadable by a text-to-speech program.

Despite being compatible with social media apps, custom fonts are not accessibility-friendly. Text-to-speech programs skip over the characters entirely without even attempting to read them. In the Canucks example, the context of the Tweet would still make sense without the former part of the sentence, but that’s not always going to be the case.

Best practice is to stick to using fonts native to the platforms and avoid customizing anything that would be read by a screen reader or text-to-speech program.

Make the effort to be inclusive

Take the time to look at your social media, test it with accessibility tools, and find ways to improve the content you’re putting out in the world.

No one is going to be perfect when it comes to being inclusive online. Technology still has a long way to go and human error is bound to happen, but making an effort to make social content more accessible ensures that everyone can enjoy it. The more people that create inclusive content, the more likely it will be for accessibility best practices to become a norm used by both industry professionals and casual social media users alike.